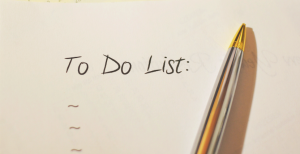 When I used to sit down to eat meals as a kid, I would save the food I loved the most for last. I wanted to get all the other stuff out of the way – those squishy potatoes, the chewy meat, the cooked carrots.   What I really wanted to savor was the green beans. So I would grin and bear the other stuff – and often by the time I got to those delightfully garlicky green beans, I was full.

One day I noticed that for years, I have had a tendency to approach my life that way. There are never a shortage of “shoulds” that hang over my head. Run this errand or that, take care of such and such, schedule time with so and so, close the loop on any number of things. And more often than I like to admit, I have lived in constant fear that one or more of these things would fall through the cracks – causing me to let someone down, or show up unprepared, or drop the ball on something altogether. So I learned to make lists that would allow all these things that swirled around my head to land somewhere.

Making lists was a good thing in many ways. It did free up space for me and keep me organized.   The trouble was that the lists became like that food on my dish that I felt like I had to endure before I could let myself enjoy the really good stuff. And just when I thought I made some headway and was close to experiencing the sweetness of what I really wanted to do, something else would land on my plate.

I have to admit – it did unnerve me a little because what I wanted to do was totally unchartered. There were no predetermined answers. It wasn’t finite. It hadn’t been done before – at least not by me. It wasn’t something I could check the box on and be done with.

And I worried that I may not have what it takes. I feared that once I allowed myself to stand in that space that I may not know what to do, or that even if I did I might get it wrong. The thought of it made me feel a little naked, exposed, vulnerable.

But I wanted it anyway.

And then I saw that though I was admittedly afraid of failing, of faltering, of being in a space where I had no idea of what I was doing, it seemed that what I had been even more afraid of was my own joy.

Because the drudge of a to do list, while not necessarily all that gratifying, was familiar and held the illusion of allowing me to be productive, and responsible and a good girl – the kind that eats everything on her plate. And I traded that for the pleasure of relishing my green beans while I was still able to enjoy them.

I thought I was making progress when I did away with my to do list altogether. I busted it to pieces. Instead of having a master list that I let run my life, I decided to identify the things that I thought really needed to get done and then I just scheduled time to do them. But then I noticed that I still didn’t have any time on there to do the things I really wanted to do. There were no green beans at all.

What I was trying to do was not do away with my to do list as much as trying to get through my to do list more efficiently. I was eating faster and playing games with myself to make getting through the meat and potatoes a little less onerous, so I could distract myself from realizing that I still wasn’t getting what I really wanted.

Maybe you can relate? Do you feel like you are running in circles and even getting a lot done, but still unsatisfied and wanting more? Longing to do strategic, move the needle kind of work, but stuck in the weeds of the operational day to day check the boxes stuff?

Are you telling yourself that you can’t have what you really want until you “get through” a whole host of things you don’t really want to do? And feeling used up and unfulfilled at the end of the day?

Does it all really need to get done?

When I took a closer, more honest look at my to do list – with the help of a friend who really challenged me on what I thought HAD to get done right away, I realized that I was clinging to things that no one was really going to care all that much about if they didn’t get done. Some of them didn’t need to happen in the next few days or weeks. And others really didn’t need to happen at all. I gave myself permission to hit delete on a few – whew! I moved others out a bit. And in their place, I designated time to write and create.

I gotta tell you, now that I’ve been doing it for awhile, it feels darn good. It’s nurturing. It feeds me. And I have a feeling doing these things is more related to my true purpose on earth than checking those boxes ever could.

So I challenge you – what is it that has been calling to you lately? What juicy thing on your plate have you not let yourself enjoy? Take a look at the things you are making yourself do first (or instead), and do an honest assessment of what really needs to get done to allow you to live the life you really want to live.

You might think letting go of things on your to do list is irresponsible. That it’ll get you into trouble. I used to think that too. But what I’ve found is that it is far more negligent for me to hold back on the things my heart most wants to do – the work I am most invested in – the calls that beckon me to see what I’m really made of and bring more of myself into the world.

And I would venture to say the same is true for you.

If you’re interested in more on how to lead your best life – in a way that allows you to experience extraordinary results with less effort and more joy, I encourage you to check out The Pinocchio Principle Unleashed: The Real Leader’s Guide to Accessing the Freedom & Flow of Your Unique Genius.  Though the spring group session is now full, you can join the waiting list to be notified of the next session.

Also – there is now an Executive Track available that blends the program with ongoing 1:1 coaching for an individualized and custom tailored experience.  If you have questions or would like to discuss which version of the program is right for you, you can click here to schedule a call directly with me.