How To Leverage Life’s Little Roadblocks 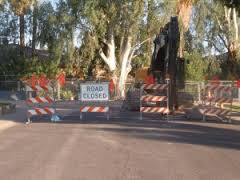 There is major construction underway at the end of my street on into the main road that leads in and out of our neighborhood.  It is blocking our normal traffic route to everything and has tripled the drive time to places I frequent every day, like my office, my kids’ school and the grocery store.  If I forget about the blockages on my way home, I have to double back to the alternate route and it takes even longer.   It’s throwing a huge monkey wrench in my daily routine and provoking an unbelievable amount of frustration and irritation.

I’m not the only one that has been twisted into a knot about it.  We live one house down from the construction, where orange and white barricades frame a giant “Road Closed” sign.  Every day I see angry people speeding to the end of our street, only to use our driveway to turn around.  I can almost hear the expletives flying out of their mouths.  Though I’m not a lip reader, I’m pretty sure they are some of the same words I’ve used upon encountering those barricades.

To make things worse, because of this construction our water has been turned off for hours at a time, and though there is warning from the city on when it is going to happen, I invariably forget until after I’ve rubbed a few squirts of liquid soap all over my hands and then realize I have nothing to rinse with.  My groans are drowned out by giant clangs, bangs and booms and the beeping of trucks that may as well be backing through our living room window.

But even at the height of my aggravation a part of me has become amused by the degree to which I’ve allowed myself to become frustrated, grouchy and resentful over something that just is what it is.  This calmer, wiser part of me knows that getting so incredibly irritated isn’t helping anything, least of all me.  And I’m certain that in that state, I’m not improving the quality of anyone else’s day either.

I even found myself calling the 24 hour information line one day when the signs and barricades were still up even though the road appeared to be temporarily unobstructed.  When the guy on the other end of the line answered, I knew by his tone that he had been inundated with calls just like mine.  Nonetheless, he was kind and understanding and did everything he could to keep me calm and provide as much information as possible on the project.  I realized this man was simply doing his job.  And that there was no good reason to take my frustration out on him.

How often do you experience roadblocks in your life?

It often seems just when we have things figured out and going the way we want them to, life throws us a curve that yanks us out of autopilot and requires us to find a new way of operating.  It’s so unsettling.  The old moves don’t work anymore.  Yet we haven’t quite become accustomed to the new way of doing things (or even found the way for that matter.)

We want things to happen the way WE want them to.  We like to be the ones to call the shots, and to have some level of predictability and routine.  I’ve often noticed that even people who claim to love change, don’t love it so much when they are not the ones initiating it.

But if moaning and groaning about it isn’t the answer, what is?  How can you navigate life’s little barricades and construction zones with more grace and less stress?  How do you redirect the energy that would have gone into complaining into something more constructive?

The answer came to me the other day in my karate class.  We were practicing sparring, which those of you who frequent my blog know I’ve had my challenges with (and learned quite a few lessons from).  Up to this point, sparring hasn’t been something I would choose to practice if given the option.  But it is an important part of the martial arts, because it allows students to begin to see how the basic techniques they’ve learned are actually applied.  It provides an opportunity to transcend mechanics and practice artfulness.  And it also sheds some light on how we can do the same in our everyday lives.

When you are in the middle of a sparring match, you can’t just stand there while fists and feet are flying at you.  And you can’t tell the person you’re sparring with to wait until you are ready or which arm or leg to throw their punch or kick with or where to aim it.  You can’t plan in advance how you will defend yourself because you just can’t anticipate what is about to happen in a way that would lend itself to planning.

You have to be in the moment.

You have to make the most of every opportunity.

And you have to get out of your head in order to know what to do next.

Once you do that, you begin to see openings and opportunities instead of obstacles and threats.  You find that you actually know more than you think you do, and a new awareness begins to emerge – one that allows you to think creatively and act with greater intent and impact.  You move more fluidly and learn to trust and rely on yourself.

I haven’t actually gotten to the point where I can consistently do all that just yet, but I know I will if I just keep practicing.  Which brings me back to the inconvenience of my little construction zone…  While I’m still not thrilled about the idea of being forced to travel new roads instead of relying on the ones that have always gotten me where I need to go, I have begun to appreciate that little inconveniences such as these also bring gifts.

They give us the very practice we need get out of our heads and learn to look at things in new ways, make new connections, and creatively find and act on opportunities in the midst of our challenges.  They also help us develop patience and exercise it in a way that allows us to remain calm and centered in the midst of chaos – and the next curve ball life will inevitably throw at us.

2 thoughts on “How To Leverage Life’s Little Roadblocks”