Home > Blog > Guidance > Are You a REAL Leader? What Pinocchio Can Teach You About Becoming One

Are You a REAL Leader? What Pinocchio Can Teach You About Becoming One 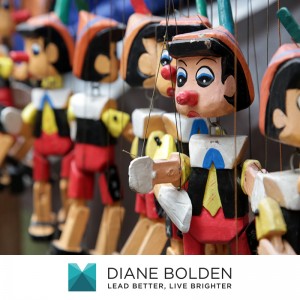 I’m thrilled to announce the re-release of my book, The Pinocchio Principle: Becoming a Real Leader with a brand new cover! In addition to a new image, the revised cover sports a new subtitle: “How to Unleash Genius in Yourself and Those You Lead”.

Often when I tell people that I wrote a leadership book called The Pinocchio Principle, they assume it must have something to do with ethics. It’s understandable, since the first thing most of us think of when we hear “Pinocchio” is a puppet whose nose grew when he lied. Pinocchio could easily be used as a metaphor for people who lie through their teeth while their proverbial noses grow…

And… it’s also easy to see why some might think it is a commentary on the importance of honesty in leadership.

While being truthful to oneself and others is a vital part of being a “real” leader, the reason I chose Pinocchio as a metaphor goes much deeper than his nose.

You see, the underlying narrative is, Pinocchio is a puppet who longs to become REAL.

Like Pinocchio, at our core we too have a burning desire to become real, (authentic, resourceful, truer to ourselves, in better service to others, etc.) to bring into creation the greatness that resides somewhere within us.

After all, you were born with these impulses — to give form to your distinctive blends of talent, energy, passion and style.

We all come into the world equipped with far more than we are immediately able to utilize or even comprehend. And though these rich parts of ourselves are always there, they have a way of becoming latent over time.

Throughout your career, you’ve no doubt come across people who have a special way of tapping into that well of available greatness.

They seem to effortlessly draw forth bits of the magic, access energy reserves, continually improve skills and pursue their passions. These are the people we love to watch and be around — they do what they do so well that it is an art.

As they tap their inner reserves and unleash their own greatness, they inspire each of us to do the same… and that’s what sets them apart and elevates them to the level of “Real Leadership”.

In Walt Disney’s rendition of Pinocchio, the puppet encounters a blue fairy. She tells him, “When you prove yourself to be brave, truthful, and unselfish, Pinocchio, then you will become a real boy.”  You can imagine what Pinocchio might have been thinking upon hearing these words. What are these things this fairy speaks of? How do I get them? What must I do? How long will it take? Where do I start?

With the promise of a dream fulfilled, he endeavors to do whatever is necessary. And the odyssey begins. The twists and turns it takes are trials we can all relate to, and challenges that are a part of our human experience.

The qualities that the blue fairy encourages Pinocchio to demonstrate are not things he must acquire. They are attributes he already possesses. But to activate them, he must endure a series of events that allow him to realize these qualities are there and to exercise them accordingly.

In order to return to himself—his true self—Pinocchio must endure a journey of trials and tribulations that first lure him away from himself. And the same kind of drama seems to unfold in one way or another for each of us.

You have — within you — an animating Genius.

This Genius yearns to take different forms depending on the circumstances. Real Leaders could be defined as those whose Genius longs to create something for the greatest good, which is ultimately accomplished for, with and through others.

It has a keen ability to look around, see possibilities and utilize resources in a way that brings something into existence that benefits others, whether that is a family, a community, a non-profit organization, a corporation, or the world at large.

To accomplish this, leaders have the distinct charge of working with others in a way that brings out their best — that allows those we can impact to find the Genius within them and apply it in service of accomplishing a common goal.

However, before you can bring out Genius in others, you must start with yourself.

Many times the primary meaning of “to lead” is associated with directing something on a given course, or being in charge, and this can be one of the functions of leadership. But the essence of leadership is much more than that. The Merriam Webster Dictionary has the following entry as the first definition listed for the word “lead”: “a: to guide on a way especially by going in advance.”

If one of the essential functions of a leader is to bring out the best in others, this definition would suggest doing so requires that leaders first bring out the best in themselves. This, in and of itself, is the very same odyssey our friend Pinocchio finds himself on: To discover and liberate within himself what is real — divinely inspired Genius — and to courageously apply it in a way that is truthful and unselfish.

I wrote The Pinocchio Principle: Becoming a Real Leader to serve as a roadmap for bringing out the best in yourself and others. My desire is to help you bring to fruition your greatest dreams and visions and better navigate through the perils and possibilities along the way. The book was written to help you:

The ultimate odyssey is always that of self-discovery. Every challenge, every opportunity gives you a chance to learn more about who you really are and to utilize your inherent gifts in service to something greater than yourself.

As I teach in The Pinocchio Principle Unleashed: The Real Leader’s Guide to Accessing the Freedom & Flow of Your Authentic Genius program, it’s only when you give yourself completely to the journey and find meaning in each step along the way, that you will truly live.

It’s your example and the unique contributions you make in the world that defines you as a Real Leader.

Now, more than ever, Real Leaders are differentiating themselves from people who simply hold fancy titles or have multitudes of people reporting to them. They exist at all levels of an organization, and they have the ability to transform it in ways that will allow it to achieve unprecedented levels of success.

Posted in Guidance, Inspiring Yourself & Others, Pinocchio Principle